Children often enjoy the ability to move from one media to another while continuing to explore the same subject. Here, a character that began through play with clay, evolved into a drawing, then a painting and finally a story. Throughout the clay Pokey Pokey remained in the studio (or was reformed as needed) as a playful character in his own right. 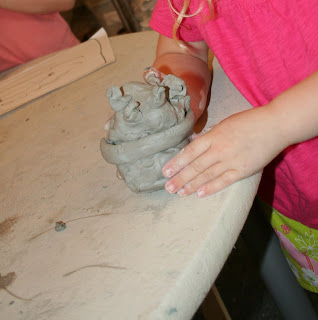 It seems this clay sculpture was the original beginning of the "Pokey Pokey" character and story which evolved over the course of a few days work in the studio and was explored in a variety of art media. Pokey Pokey had personality from the moment of creation and would say hello to friends in the studio. 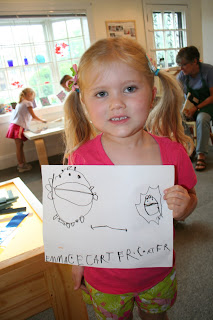 Here, the artist completed a drawing of her sculpture. 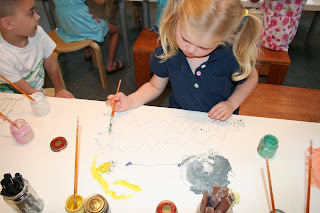 A day later when we began a painting, Pokey Pokey was still on her mind and she began with a similar drawing which was completed with paint and the telling of his story. 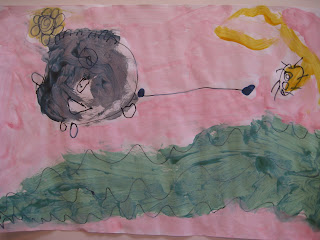 "Pokey Pokey playing with his friends and they are playing in the grass. And then they got lost and then there was something pointing to each of them and they couldn't see it very well and it was magic and it was black. It was a connection. It points to everyone. There was a swirly sun and there was yellow all around. And there was lots of light pink around them too." The story was recorded and displayed with the picture as well as becoming a part of a class book of paintings and stories.

Posted by Kathryn Coneway at 11:33 PM