We decided to return to mixing colors and exploring color relationships; interests that emerged in the group while painting the chairs. 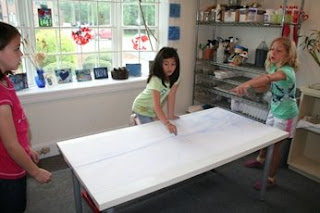 We began with plumb lines (a carpentry tool) to make chalk lines to form a design for a group mural painting. 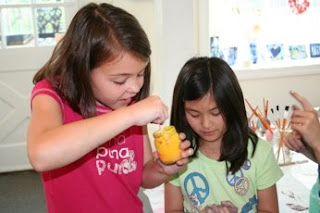 After creating a design with lines, the children mixed paint in individual jars. They recorded their color "recipes" and named the colors they created. 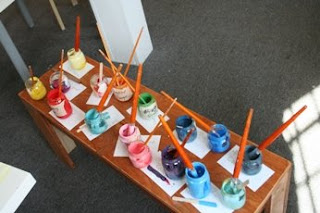 Colors from the group palette. The cards under the jars record the names of the colors and the recipe (written in numbers of squirts of red, yellow, blue, and white). The children enjoyed helping each other figure out color recipes and names for colors. 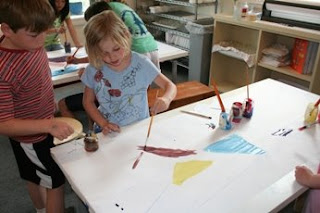 The worked in groups of three to fill in the shapes created by their lines. 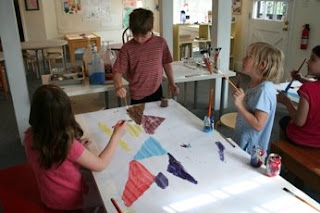 As they filled in more spaces, new colors were needed and created. The conversation returned to ideas about how colors relate to each other and what makes a color stand out or "pop." 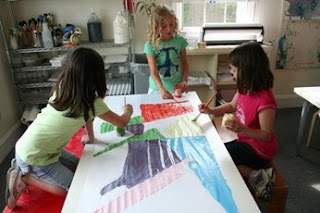 The more spaces they filled, the more consideration was needed about what color would go in a space as there were more relationships to consider with a number of colors surrounding the free space. It became like a puzzle of creating or finding the right color for a free space based on the colors around it. 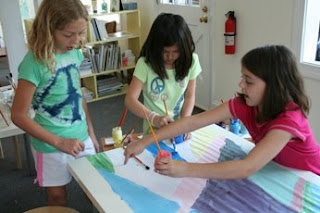 As with many group projects it required some planning as you go, as well as flexibility on the part of the participants. The group conversation became more involved as the color relationships became more complex as they filled the spaces in the mural. 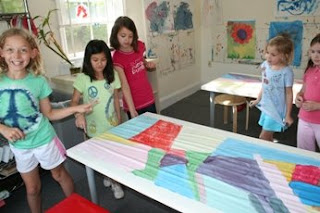 The Friday after-school studio time offers school-age children (6-10 years) an opportunity to explore and create in a studio setting. In the six short weeks of this session we've tried our hands at drawing, painting, collage, color mixing and clay.

The children who had been in the studio before arrived asking to mix colors and use clay. So we have mixed colors and used clay. The students used the colors to paint their drawings and we introduced the idea of "making the colors pop". Observing the contrasts colors can make gives the students another way of using their color knowledge. 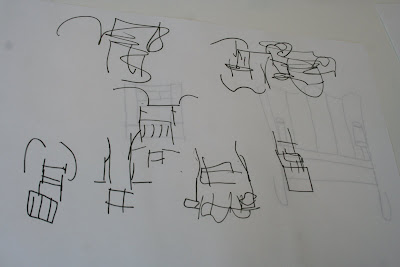 We started with blind contour drawings of children's chairs. Without looking at the paper while drawing, the drawings look a bit like puzzle pieces that need to be fit back together. 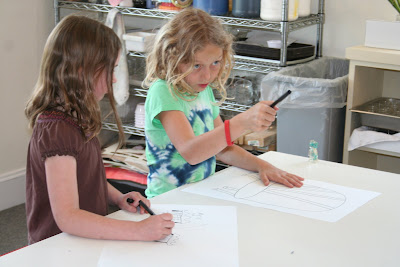 After the warm-up, we challenged the children to choose a chair and draw it. We asked them to slow down and take the time to carefully look at the object. And we talked about how often we draw the "idea" of a chair (or house or leaf, etc.) without actually looking at the object before us. 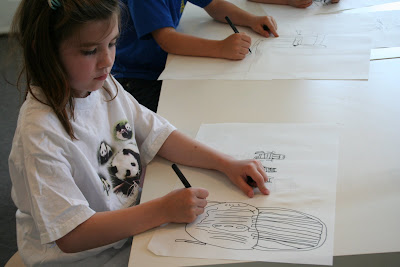 M.C. noticed the wood grain. Her observation was shared in the studio setting with the other students thus improving everyone's observations. 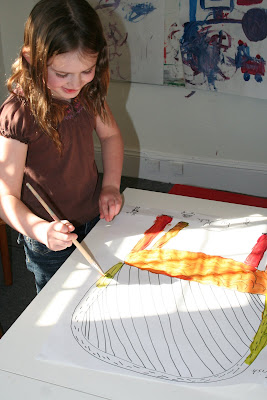 Then the painting began. The drawings took on a life of their own with the addition of personally mixed colors. 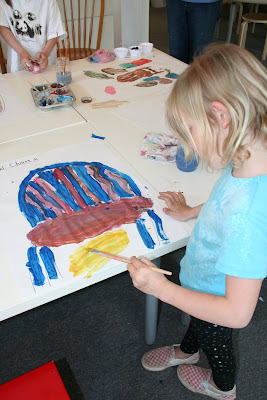 We encouraged the children to find a background color that "made the chair pop" or contrasted. They love using bold bright colors.

On May 5 Teresa and I attended a panel discussion at the American Visionary Arts Museum entitled: Arts, Creativity and Other Outrageous Ideas. The museum passed out the following list of education goals and the founder and director if the AVAM, Rebecca Alban Hoffberger, spoke about her vision and the museum's definition of "art" which she likened to the experience of primitive cultures who do not have a word for "art." Instead they had words for describing something well-made or beautifully performed - she challenged the audience to think of anything we do as being an art and of teaching as an art form. Rebecca and several other speakers spoke about a hope that visitors to the event and to the museum would leave inspired to find their own voice and explore their creativity.

1. Expand the definition of a worthwhile life.

2. Engender respect for and delight in the gifts of others.

3. Increase awareness of the wide variety of choices available in life for all...particularly students.

4. Encourage each individual to build upon his or heer own special knowledge and inner strengths.

5. Promote the use of innate intelligence, intuition, self-exploration, and creative self-reliance.

6. Confirm the great hunger for finding out just what each of us can do best, in our own voice, at any age.

7. Empower the individual to choose to do that something really, really well.
Posted by Kathryn Coneway at 9:44 PM 2 comments:

Email ThisBlogThis!Share to TwitterShare to FacebookShare to Pinterest
Labels: Inspiration and Ideas

Paint and Draw...and Talk About It

With our youngest artists it is delightful to hear how their work with materials impacts and inspires their language development. 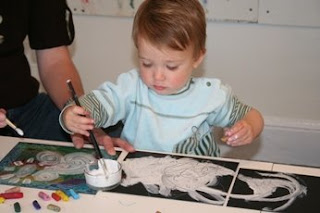 Here we were painting on a black board and also offered sticks to draw lines back into the wet paint. This child discovered the opposite end of the brush also worked for drawing lines in the paint. He would paint and then flip the brush and draw lines and then return to cover over them moving the paint around with the brush again, each time stating paint, draw, paint and looking around to see that we saw he was changing his activity even though he had the same tool.
Posted by Kathryn Coneway at 11:08 PM 1 comment:

Some photos of our first mosaic workshop in the studio.
The children were clearly delighted with the materials and spent a great deal of time and energy working with their patterns and arrangements. 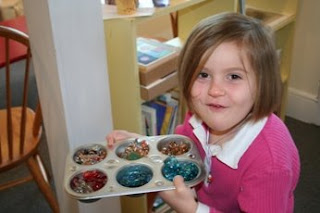 Beginning with the border and lining up patterns of shapes and colors. 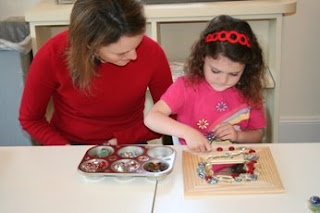 An arrangement starting around the center.

Planning patterns to frame and fill in the space around the mirror. 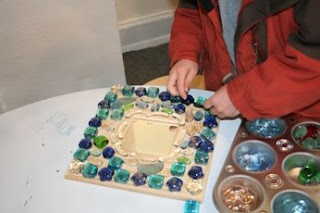 Trying out color combinations and forming shapes within a design. 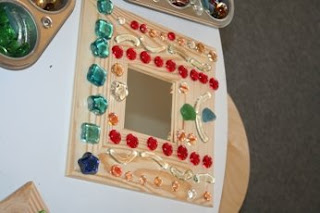 Exploring symmetry, shape and grouping of warm and cool colors. 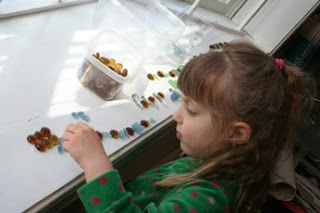 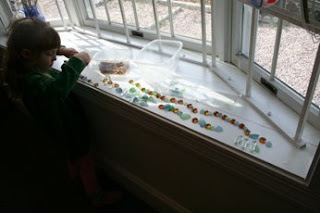 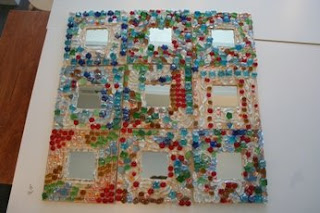 The finished group of mosaic mirrors.
Posted by Kathryn Coneway at 10:22 PM No comments:

Papermaking - Our First Workshop in Our New Location April 7, 2009

Here are some images from our paper-making workshop in our new space. We pulped shredded paper in the blender, then used screens as molds to form new handmade sheets. 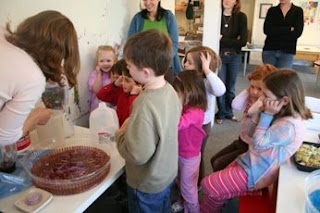 Holding our ears while the paper pulps in the blender. 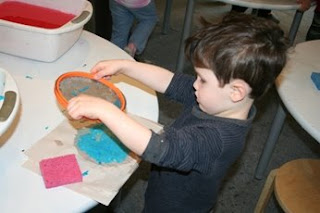 A new sheet pressed from a circle mold. 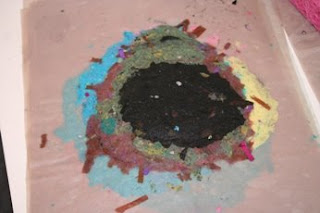 That first sheet grew with many layers into a "paper pie." 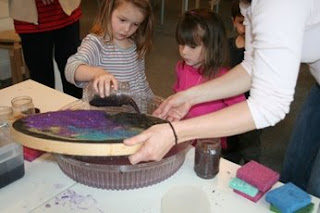 Pouring pulp onto a group piece. 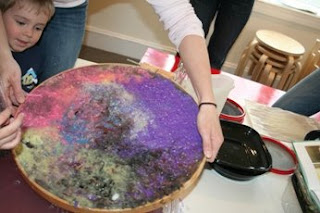 The final group paper mandala of swirling colors.
Posted by Kathryn Coneway at 11:41 AM 2 comments: